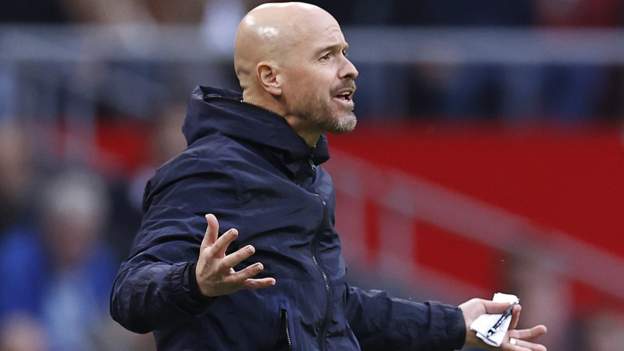 Erik ten Hag was never really one of those people who made it clear he had massive ambitions to be one of the world’s top coaches. He is a very humble man and a modest coach.

That has a lot to do with his background. He comes from the east of the Netherlands where there’s a very down-to-earth mentality and where people speak with a very strong accent. They are a bit less flash there and they look up to those from Amsterdam, Rotterdam and The Hague, the places where the big offices, industry and the country’s parliament are.

But despite that background – and he does have a strong accent – Ten Hag’s situation is different. Financially there is no motivation and no need to go for the big jobs at any stage in his career because he comes from a very rich family, and his father and brothers are multi-millionaires. They own a real estate company and other financial firms.

His father wanted him to go into that company but from a young age Erik was such a brilliant footballer – he was a star for FC Twente as a defender – that he made it clear he had no interest in pursuing that line of work.

However, that family wealth means he doesn’t need the big jobs. He knows he doesn’t need football to survive so he can follow his own principles, where other managers might compromise to stay in their jobs.

Man Utd move closer to appointing Ten Hag
His football philosophy has always been like Pep Guardiola’s and Johan Cruyff’s. He likes to attack, to create things on the pitch.

I followed PSV Eindhoven for some time when he was the assistant manager there, just as he was Steve McClaren’s assistant at FC Twente. He was instrumental at those clubs. He never tried to push in but the managers were so reliant on him because he was tactically so strong. It was a joy for them to have him and that says a lot about him.

When he was at Bayern Munich as their reserve-team boss he loved it. It was almost like a dream come true for him to have a manager in Guardiola who was working the same way he wanted to work. He said to me once that he loved spending time with Guardiola, loved talking to him. He had to produce players ready for the first team as the reserve manager so that’s why the whole set-up worked for him.

Players can find it hard with him because, like Guardiola, he comes across as a bit obsessive. To get a style like you do at Ajax – Dutch Total Football, basically – it needs lots of work and lots of attacking players. It leaves a lot of space and you want your defenders playing really high up. It entails a lot of risk and you have to be a bit of a maniac to instil in your players that every pass has to be just right, that there can be no mistakes.

But his man management is excellent and all his players say they have learnt so much from him.

Whereas many coaches focus on the first XI, Ten Hag will spend an incredible amount of time on the training pitch. At Manchester United he won’t just pay attention to the star players like Cristiano Ronaldo or Harry Maguire, he’ll also go to the 19th or 20th most important player. He’s taken on players with different characters and he doesn’t mind how many hours he has to spend with them, he will give all his time to them.

That’s where he gets the respect from the players because they see the effort he puts in to improve them individually. Even with those who have the most difficult background – some kind of baggage, maybe – if he thinks the talent is there he’ll make sure they fit in.

He is not scared to take on the Manchester United job. But he will want to be in a tracksuit many hours a day. He doesn’t consider himself an office man – if he did he’d have gone in to his dad’s company. He would hate to constantly be on the phone to agents. That’s where he’ll want a sporting director or an assistant with the ability to do that.

For me, it would be a mistake for him to go down the route of thinking part of his job is fitting into the traditional English way of management.

He will not want to go in there thinking he has to take on the whole of Manchester United. He will want to focus on giving the club an identity again – and he will do that best by putting on a tracksuit.

Another potential issue is that Ten Hag has never felt that comfortable in front of the camera. That will be a challenge and he might find it difficult to get his message across. If he went to a German club – and there is serious interest there – he’d be totally in his comfort zone because where he lives is on the German border. Everyone in that area has German as a second language.

English, however, is anything but his comfort zone and in my opinion a manager who takes charge of one of the biggest clubs in the world based in the UK, with all the publicity and media around him, should be able to command the English language really well. It won’t stop him from being successful but it would help enormously if he improved. I understand he’s been practising his English a lot.

At the beginning of his time with Ajax my own newspaper was very critical of him because of certain tactical choices and the players found it hard to get used to his very long training sessions and long talks on the pitch.

Yes, he built a good team but by Dutch standards he was given good players. Immediate success was demanded of him but what bowled people over was how Ajax played in the Champions League in 2018-19 against Real Madrid, winning 4-1 at the Bernabeu to knock them out, and against Juventus in the quarter-finals.

But perhaps what impressed the most was that when Ajax sold their best players, Matthijs de Ligt to Juve and Frenkie de Jong to Barcelona, he had given the club and the team such an identity that it was easy for new players to fit in.

If United fans want to know about his approach then one reflection from the man himself might be illuminating.

His idol was Dutch international Epi Drost, who came from the same area and same club as Ten Hag and was his coach at FC Twente.

“Epi had a soft spot for me because I was by far the youngest in the squad,” Ten Hag recalled. “He let me play in the U23 team as a 15-year-old. He was a mega fan of skilful and adventurous football. He would stimulate creativity because that was the most important aspect of the game. I learned so much off him.”

If I have to compare him to someone I’d liken him to Ronald Koeman. They both played as central defenders, leaders at the back who oversaw the game and the team from that position. As managers both are massive fans of Total Football but Koeman has never wanted to be as adventurous as Guardiola. If there is one big difference between the Manchester City boss and Ten Hag, it is that the Dutchman has that same slightly more realistic approach that Koeman does. They have one more eye on the defence than Guardiola would.

The people he works with at Manchester United will quickly learn that he is a very loyal person – that is one of his key characteristics.

When he started out in the FC Twente academy at around the age of 14, he was quickly moved up to the U18s and he played for many years with the same guys, most of whom stayed mates with him and still are.

But while he was there two of his best friends died, one in a plane crash in Suriname. Andy Scharmin, a boy who was destined to play for the Netherlands, was selected for an exhibition game by Suriname, who didn’t have a formal national team, and he chose to go. The plane he was on crashed and killed a large number of the team. He was one of Ten Hag’s closest friends – they did everything together. That was a massive upset in his life.

Another friend took his own life, and a third suffered a horrific injury. All three had looked destined for an international career. That affected him quite a bit and he did draw inspiration from wanting to succeed where his friends never got the chance to.

A lot came from the heartbreak of losing his friends. That still drives him on, even now.