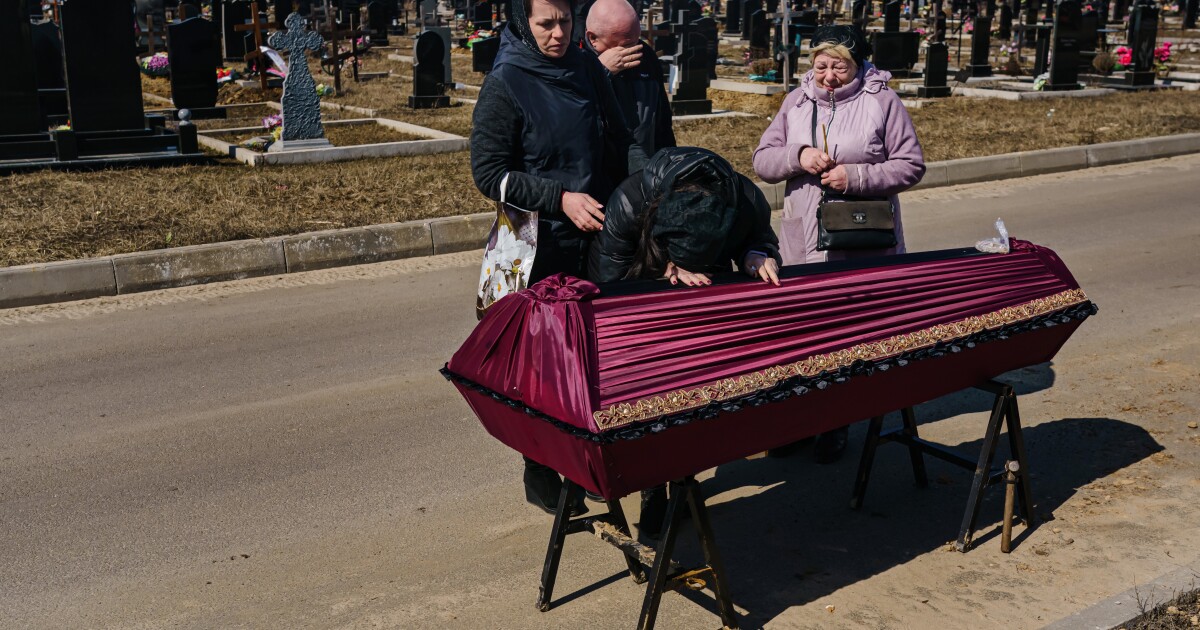 In a city stalked by death and bombardment, only four mourners gathered Thursday in a blustery chill for a final farewell to Boris Romantschenko.

But in the six days since the 96-year-old survivor of Nazi concentration camps was killed by a Russian missile strike in the Ukrainian city of Kharkiv, the world came to know his story.

As Hitler’s darkness descended on Europe in the 1940s, Romantschenko, still a teenager, was captured by the Nazis and deported from Ukraine to Germany as a forced laborer. An attempted escape yielded capture and incarceration at Buchenwald — the first of four concentration camps in which he would be imprisoned. He saw many around him die of hunger, privation and other cruelties.

Yet in later years — as a father, grandfather and great-grandfather — he possessed a lightness of spirit that defied the horrors of his past, according to his 34-year-old granddaughter, Julia Romantschenko.

He loved to dance. He loved his little dacha, a rustic hut outside the city.

“He was a patient person,” she said. “He was a joyful person. He was supportive of everyone around him.”

His funeral, at a roadside cemetery on the city’s southern edge, was simple, stark — and held in haste. It was too windy to light candles. The stiff breeze quickly dried tears. The bearded young Orthodox priest was bundled in a parka.

Surrounded by black tombstones and makeshift wooden crosses, the little group of mourners — his son, Igor Romantschenko, 60; his daughter-in-law, Liubov Romantschenko, 62; Julia, their daughter; and a family friend — clustered around Romantschenko’s coffin, set on a stand and draped with a gold-trimmed maroon cloth.

Everyone wept. A piece of history was gone. A boy who had survived the worst of human nature died an old man in a fresh atrocity.

The young priest prayed and swung his censer. The mourners made the sign of the cross. The cemetery workers hammered the coffin shut.

When it had been lowered into the ground, the mourners tossed in handfuls of dirt, then watched as the workers swiftly filled the hole with soil. When a concrete frame was placed around the grave, his family carefully brushed the dirt off, trying to make it tidy.

As Russian bombing has escalated in intensity, tens of thousands of people have fled Kharkiv. But Romantschenko, despite his family’s urging, had no desire to escape the city, his granddaughter said.

He had always considered Ukraine’s northeast, close to the Russian border, his home. He was born about 130 miles away from Kharkiv, in Bondari, near the northern city of Sumy.

The missile that slammed into his eighth-floor apartment building on Friday was only one among the rocket and artillery strikes that have targeted the city, destroying hundreds of structures. Large swaths of Kharkiv, Ukraine’s second-largest city, lie in ruins, reminiscent of the destruction wrought across Europe more than half a century ago.

Romantschenko had stayed mainly inside during the COVID-19 pandemic, and Julia, who spoke with him often by phone, believes he could not have mustered the strength to try to get downstairs even if he heard warning sirens. She last saw him a little over two weeks ago.

“I’d been calling him — asking him if he could hear any shots or explosions,” she said. “But his hearing was not good. He could sometimes hear something, but he says it was all too far away.”

When she learned that his building had been hit, nighttime curfew had already started, and she had to wait until morning to rush there. “Then I saw the awful scene.… He really didn’t deserve to die this way,” she said.

After World War II ended, Romantschenko found solace in remembrance. He was active in memorial organizations dedicated to ensuring that Nazi cruelties were not forgotten. It was one of those groups, the Buchenwald and Mittelbau-Dora Memorials Foundation in Germany, that announced his death after being alerted by the family.

“We mourn for our dear friend,” the group wrote on its website. The German Parliament commemorated his death, as did Ukraine President Volodymyr Zelensky, and tributes rolled in from around the world.

The weight of history, and its inescapably cyclical nature, colors the conflict of today. Kharkiv, like Ukraine as a whole, suffered enormously in World War II, changing hands several times between the Soviet Union and Germany.

When the Russians invaded and Ukrainians rushed to try to repulse them, Romantschenko “couldn’t believe it,” his granddaughter said.

“Because he was a survivor, he knew with absolute certainty what war was like,” she said. “He couldn’t believe that people were again capable of doing something similar — destroying lives, civilians, houses, and a peaceful society.”

Since the war’s outbreak a little more than a month ago, Kharkiv’s dead number at least 500, officials have said, but a full accounting will probably be considerably higher.

As Romantschenko was being laid to rest, other funerals were taking place, also hurriedly. But on this day, the bereaved were spared: The boom of bombardment was stilled, at least for a time.

As the mourners were driving away, the lull ended: this time, the sound of outgoing artillery.

The war spun on.

Yam reported from Kharviv and King from Washington.