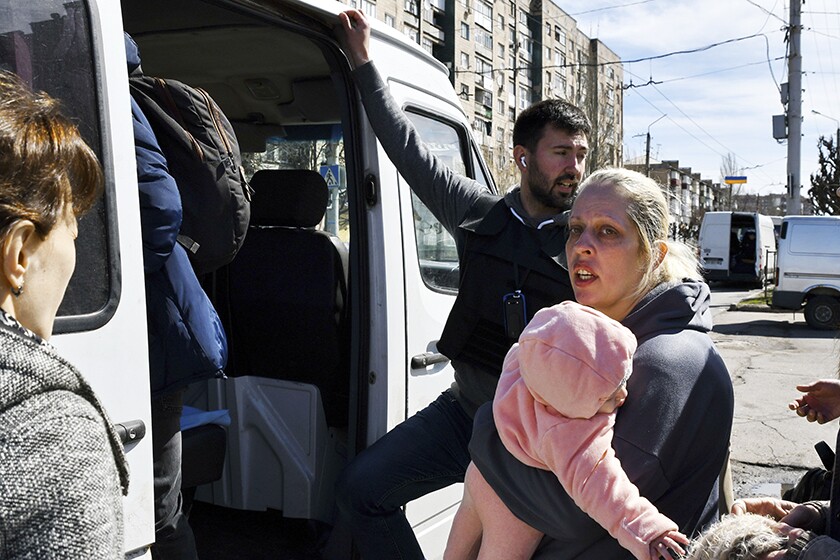 With President Volodymyr Zelensky demanding tribunal-style justice for a deadly strike on a train station in Ukraine’s east, terrified civilians fled Saturday by the thousands from the region, expected to be the next major battleground in the more than 6-week-old war.

Zelensky predicted a “hard battle” in the east, where he said Russian forces were gathering.

“We believe in this fight and our victory,” he said at a news conference in the capital, Kyiv, alongside the visiting Austrian Chancellor Karl Nehammer. British Prime Minister Boris Johnson also paid an unannounced visit to Kyiv on Saturday.

Amid a wave of international condemnation and fresh sanctions, Russia has denied responsibility for the missile strike in the city of Kramatorsk on Friday that killed at least 52 people, according to Ukrainian officials. But Western military officials affirmed that Moscow’s forces were behind the attack.

Zelensky warned in his overnight address that those responsible for the railway strike, at all levels of planning, would face consequences.

“This is another war crime of Russia, for which everyone involved will be held accountable,” the president said. Investigators, he declared, would establish “who did what, who gave orders, where did the rocket come from, who was carrying it, who gave the order and how the strike was coordinated.”

Ukrainian officials are also continuing to painstakingly document gruesome forensic evidence of atrocities against civilians in areas close to Kyiv, which Russian forces occupied for about a month before breaking off a failed bid to capture the city.

In a sign of some normalcy returning to the capital following the Russian redeployment to the east, some Western diplomats are beginning to filter back.

Italy’s foreign minister, Luigi Di Maio, was quoted by the Italian news agency ANSA as saying Saturday that Italy would reopen its Kyiv embassy later this month, after Easter. The European Union has already said its head of delegation was back in the capital to reestablish the EU diplomatic presence.

But the relative calm in the capital region contrasted with a growing sense of alarm and imminent danger in the country’s separatist Donbas region in the east.

Following the devastating bombardment in Kramatorsk, which left crumpled bodies strewn across the station platforms, Ukraine’s national railway service was ferrying people away from the area as quickly as possible, using nearby cities as jumping-off points for the exodus.

Despite fears that civilians trying to escape the east would again be targeted, Ukrainian officials repeated appeals to noncombatants to flee if they could.

The mayor of Kramatorsk, Oleksandr Honcharenko, said Saturday that evacuation buses would transport people to neighboring cities like Sloviansk, where they could catch trains bound to safer parts of the country.

“The railways do not halt the task of taking everyone to safety,” the railway operator said in a statement on the messaging app Telegram. Departures would continue from stations in the Donetsk and Luhansk regions, it said.

The governor of Luhansk, Serhiy Gaidai, said on public television that Russia was “amassing forces for an offensive” and shelling had intensified, making it imperative that civilians find haven elsewhere.

The next phase of fighting is likely to increase in ferocity, Western officials said. At the Pentagon on Friday, a senior U.S. official forecast a metaphorical “knife fight,” saying combat would be “very bloody and very ugly.”

There were growing indications that Russia was laying the groundwork for redoubled combat in the east with strikes on Ukrainian military infrastructure.

Russia’s military said Saturday that its forces had destroyed an ammunition depot at the Myhorod airbase in Ukraine’s central-eastern Poltava region and claimed to have wrecked a Ukrainian fighter jet and helicopter in the strike. A Defense Ministry spokesman was also quoted by the Interfax news agency as saying another ammunition depot was taken out near the city of Novomoskovsk, in the Dnipro region.

With up to one-fifth of Russia’s initial invading force thought to have been incapacitated, Russian President Vladimir Putin is likely determined to seize strategic chunks of Ukraine, including the eastern industrial heartland and parts of the southern coast, in order to portray the invasion as a victory, analysts say.

At home, Putin has moved to crush dissent and criminalize antiwar activity. His Justice Ministry said it had revoked the registrations of a dozen international organizations including the rights groups Amnesty International and Human Rights Watch. The groups vowed to carry on their work elsewhere.

With roughly a quarter of Ukraine’s 44 million people displaced from their homes, more than 4 million have fled to neighboring countries. In Warsaw on Saturday, European Commission President Ursula von der Leyen said a global pledging event for refugees of the war in Ukraine had raised $11 billion.

Meanwhile, Ukraine’s deputy prime minister, Iryna Vereshchuk, reported fresh efforts Saturday to help civilians leave the besieged southern port of Mariupol by private transport. The city has been savaged by Russian airstrikes since the first days of the war.

Ukrainian officials for weeks have cited reports that Moscow, in the guise of a humanitarian intervention, has been spiriting Mariupol evacuees away to Russia. On Saturday, Russia’s RIA news agency quoted the Defense Ministry as saying dozens of people had been “taken to safe places” from the city Friday.

More than 30,000 people have been “illegally deported” to Russia from Mariupol, Ukrainian officials say.

Control of Mariupol is considered a particular prize for Russia, because capturing the city would allow the creation of a land corridor from Russia and territories it controls to the Crimean peninsula, which Russia seized eight years ago.

Ukrainian forces have “continued to hold out against Russian assaults” in parts of southwestern and eastern Mariupol, according to a report late Friday from the Institute for the Study of War, a Washington-based think tank.

Russian naval forces have been launching cruise missiles to support military operations around Mariupol, on the Sea of Azov, and Mykolaiv, near the Black Sea, British military intelligence said in an assessment Saturday.

Despite denials from Moscow that it deliberately targets noncombatants, British officials said Russia was continuing its attacks on civilians and would likely conduct more strikes like the one in Kramatorsk.

McDonnell reported from Kyiv and King from Budapest, Hungary.