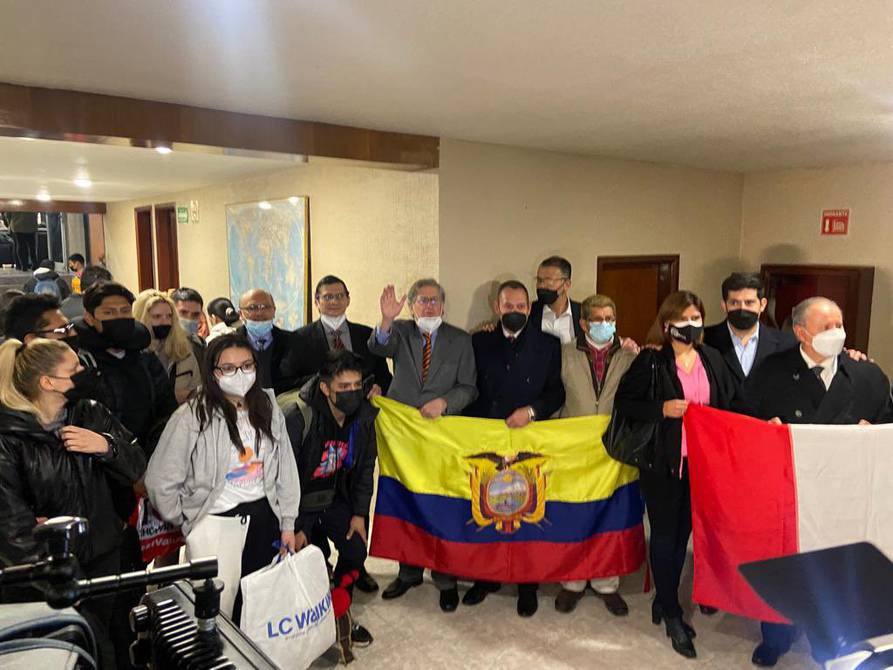 Seven Ecuadorians and two Ukrainians evacuated from Ukraine arrived in Mexico on a humanitarian flight from that country, the Minister of Foreign Affairs and Human Mobility of the Andean country, Juan Carlos Holguín, reported this Friday.

The Ecuadorians are expected to arrive tomorrow, Saturday, in Ecuador.

“Our compatriots have already arrived in Mexico, on a flight that brought 139 passengers from Romania,” wrote the head of Ecuadorian diplomacy on his Twitter account.

“Thanks again to the Government of Mexico for its solidarity and to its ambassador in Ecuador,” Raquel Serur, indicated Holguín.

Our compatriots have already arrived in Mexico, on a flight that brought 139 passengers from Romania. On Saturday they will arrive in Ecuador. Thanks again to the government of Mexico for its solidarity and to its ambassador in Ecuador @RaquelSerur3 pic.twitter.com/y7xVNcHoU3

The foreign minister posted a photograph showing, among others, the young Ecuadorians who had been evacuated and the ambassador of the Andean nation in Mexico, Francisco Carrión.

Mexico opened space on its humanitarian flight for 16 Ecuadorians, but because the flight initially planned for this Friday was advanced one day, only nine Ecuadorians could board, the Foreign Ministry reported on Thursday, which noted that the remaining seven will be included in a second flight. humanitarian.

248 nationals who managed to escape the war in Ukraine arrived at the Quito airport this Friday morning and who boarded the first humanitarian flight chartered by Ecuador on Thursday to return home and reunite with their families.

This group of 248 travelers constitutes almost a third of the 745 Ecuadorians, most of them students, who, according to the Ecuadorian Ministry of Foreign Affairs, managed to leave Ukraine in recent days.

Before heading to Quito, the charter flight made two stops in Budapest and Warsaw, the two cities where the majority of Ecuadorians who left Ukraine behind were concentrated.

It is already in #Quito the first group of Ecuadorians to come on the humanitarian flight.

Your relatives will welcome you.

Although it was planned that 350 would travel on this first flight, the aircraft will arrive with around a hundred empty seats after a large group was left unable to board the plane in Poland, apparently not being on the lists handled by the crew. of the flight.

Holguín argued that this circumstance was due to the fact that priority was given to Ecuadorians who were in Hungary and Slovakia on this first humanitarian flight.

“We had to make this tough decision due to an operational change,” Holguín said in a video message posted on social media.

The foreign minister explained that the Ecuadorians who stayed on the ground in Warsaw have been transferred to have accommodation in the Polish capital and promised that there will be another humanitarian flight for them and the rest of their compatriots scattered in various parts of Eastern Europe.

“Everyone will be enough to have more than 500 Ecuadorians evacuated from the war on Saturday. In war, decisions are made to the minute,” Holguin said.

Likewise, the Executive has already anticipated that it will manage the inclusion of these students in national universities so that they can continue their studies. (I)