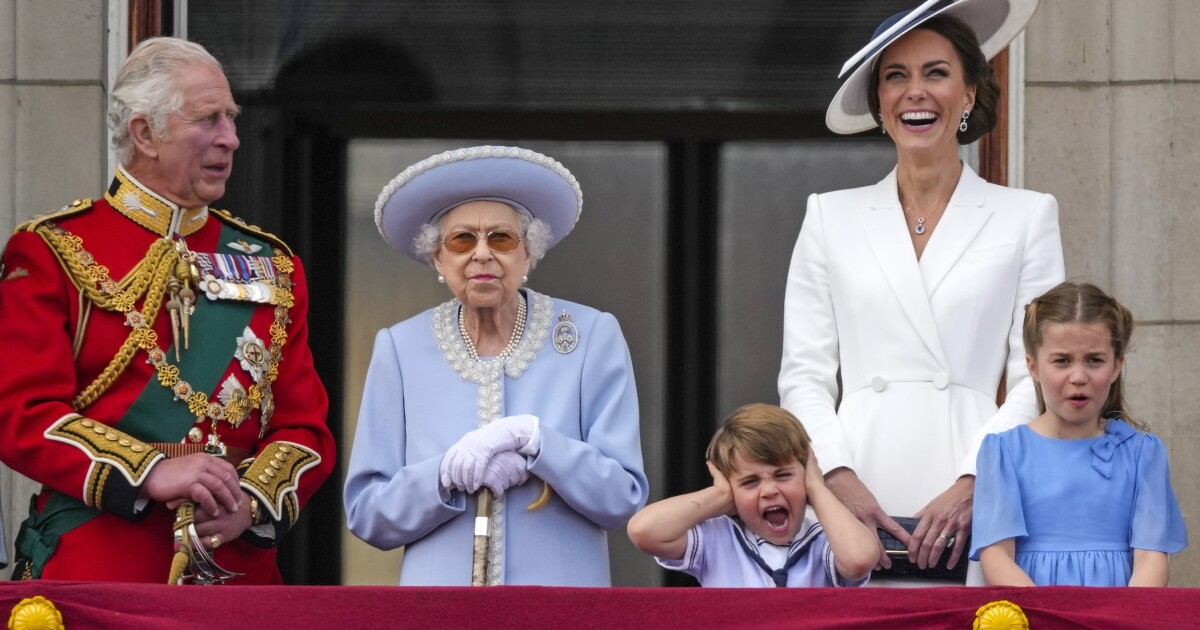 It’s been billed as the party of all parties, a star-studded four-day celebration of Britain’s longest-reigning monarch for her 96th birthday and 70 years on the throne.

But the Platinum Jubilee of Queen Elizabeth II, which has snarled traffic around Buckingham Palace, given Britons an extra-long weekend and will offer up performances by American, Irish and British stars — Diana Ross and Alicia Keys among them — has also underlined the question of what happens next for a monarchy seemingly inseparable from its aging head.

As wall-to-wall live coverage began Thursday of the Platinum Jubilee — the only one in a royal lineage that stretches back more than 1,200 years — speculation about the monarchy’s future is as rife as the excitement over the military parade, street parties, outdoor concert, service at St. Paul’s Cathedral and other events scheduled through Sunday.

The queen emerged on the famous Buckingham Palace balcony Thursday to watch a flyover tribute and to wave at the cheering crowds thronged outside the gates and along the Mall leading to the royal residence. But her brief presence alongside other members of the royal family served only to underscore how rare and unpredictable such public appearances have become as Elizabeth battles increasing infirmity.

“The new normal, if you’d like, is that you don’t know if she’s going to turn up,” said Chris Ship, the royal editor of the ITV network and a host of its live coverage. The elaborate Trooping the Color — a military horseback parade — that kicked off the festivities offered a case in point: The queen has almost never missed the annual event, but on Thursday, she was represented by her eldest son and heir to the throne, Prince Charles.

Elizabeth, who was born April 21, 1926, but whose birthday is marked nationally on the second Saturday of June, broke the former record reign for a British monarch — set by her great-great-grandmother Queen Victoria — in 2015. She was crowned in the aftermath of World War II, outlived nine prime ministers and saw the Iron Curtain rise and fall before witnessing Britain’s exit from the European Union.

Only three other monarchs have reigned longer than 70 years: Liechtenstein’s Johann II, France’s Louis XIV and Thailand’s Bhumibol Adulyadej, who died in 2016.

Exactly how much longer Britain will have Elizabeth is unknown, but many Britons — as well as the royal machine that keeps the monarchy humming — are already bracing for her exit from the royal stage. Her late husband, Prince Philip, died in 2021. She herself has become increasingly frail and canceled numerous engagements. After falling ill with COVID-19 this year, she said it had left her “very exhausted and tired.”

“Many people are wondering, pretty openly and loudly, what will happen after the queen passes,” said Pauline Maclaran, a professor of marketing and consumer research at Royal Holloway, University of London who co-wrote “Royal Fever: The British Monarchy in Consumer Culture.”

“We know who comes next in the line — Charles — even if of course many people want to see Prince William become king. But more than that, this family is going to hit a rocky patch. None of these men are as popular as the queen or as known globally.”

In a family whose celebrity status and tabloid scandals pre-date the modern Instagram- and reality TV-fueled followings of the likes of the Kardashians, Elizabeth has been among the few prominent members to largely maintain a positive image among her subjects in recent years.

Charles was portrayed as a villain in the press leading up to his divorce from Princess Diana in 1996. After Diana’s death a year later, Elizabeth was also criticized as being too slow to publicly mourn or console her people as she stayed behind closed doors at her Scottish castle, Balmoral, though she seemed to quickly rebound.

More recently, the queen was tested when Harry and Meghan, the Duke and Duchess of Sussex, said in 2020 that they would quit their royal duties and live in Southern California. Later, in an Oprah Winfrey interview, Meghan, who is biracial, said some in the monarchy were racist toward her and paid little attention to her deteriorating mental health, though she spoke kindly of the queen.

And earlier this year, Elizabeth stripped her second son, Andrew, of his royal patronages and honorary military titles as a result of a lawsuit against him by a woman who said she was forced as a teenager to have sex with him after being groomed by Jeffrey Epstein.

Prince Charles will be crowned king in a much different world from when his mother acceded to the throne in 1952.

He is also 73, nearly three times older than his mother was when she became queen at 25. He belongs to the vast majority of Britons who either have no real memory of or who have known no other sovereign in their lifetime.

“After that long a reign, it will be hard to imagine anybody in that role,” said Carolyn Harris, a historian of the royal family and history instructor at the University of Toronto.

Although he has yet to take over “the firm,” as the royal household refers to itself, Charles has already signaled his desire for the number of working members of the royal family — those who make public appearances, travel globally on behalf of the palace and participate in charitable causes — to be smaller.

“There have long been questions as well of how much public financial support should be provided to the family, something a transition away from the queen is bound to bring up again,” Harris said.

The end of the second Elizabethan era will also sharpen questions as to the survival of the monarchy abroad. Besides the United Kingdom — England, Scotland, Wales and Northern Ireland — the British monarch also reigns over Canada, Australia and a dozen other nations that were former colonies, mostly in the Caribbean and the South Pacific.

Republicanism is growing in some of those places. Last year, Barbados decided to ditch the queen as its head of state. Jamaica is considering following suit. A trip to the Caribbean in March by Prince William and his wife that was meant to shore up support for the monarchy wound up doing the opposite for many amid photos of the white royal couple shaking hands with Black children in Jamaica through a wire fence.

“Everything about this is wrong,” one critic said.

But all the talk of Elizabeth’s inevitable death — and the chatter over the drastically curtailed public engagements of a woman who once said of her own royal mystique, “I have to be seen to be believed” — is premature for one man who worked under her for a dozen years.

“Don’t kill off the queen quite yet,” said Dickie Arbiter, 81, the queen’s press former secretary, who is now a prolific commentator on the royal family. “Her mind is razor sharp. Yes, she has had some mobility problems, primarily with her knees. … But she is stoic and robust.”

So is the institution she represents, said Arbiter, who was a boy during the last years of George VI, the queen’s father.

“I remember King George VI, and I will probably be around for when Queen Elizabeth II passes. This family has the capacity for survival,” he said. “There are a lot of people who will mourn her loss. But people will move on and accept the new realm.”