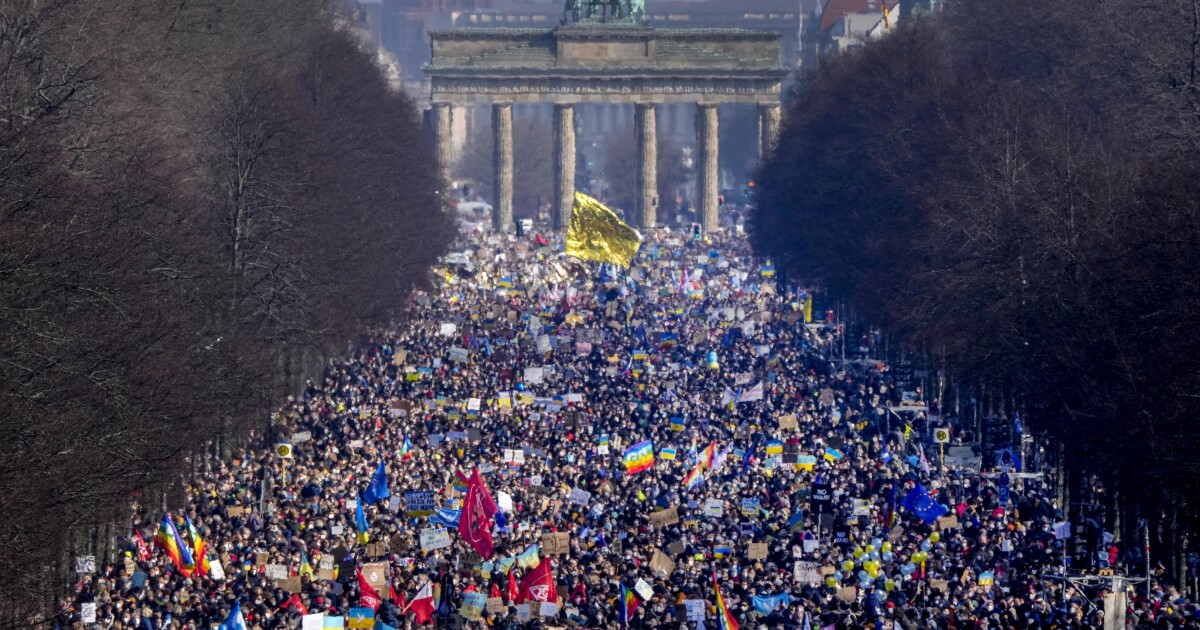 I was visiting family in a village not too far from the city of Wiesbaden, Germany, when I learned that an unexploded World War II bomb had been found just a few kilometers away, near the gas station we passed on the road into town.

It was British-made, weighing about 275 pounds, presumably dropped during the war by the Royal Air Force — just one small remnant of the 2.7 million tons of explosives dropped by the British and the Americans on Europe between 1940 and 1945, half of which fell on Germany.

As many as 1 in 10 of those bombs failed to explode on impact and year after year they still surface, dangerous until they are defused or carefully detonated.

In that way, at least, the war continues to this day.

It’s no wonder Europeans can’t stop thinking about the past. Today’s war has such clear echoes of those previous conflicts, in which disputes over territory, power, resources, nationality, ethnicity and religion led to so much death and destruction on the continent for so many centuries.

In the United States, we are notoriously ignorant or forgetful of such history. Six in 10 Americans can’t even name the countries we fought against in World War II, according to a 2018 survey.

But in Europe, distances are shorter — it’s not much more than eight hours by car from eastern Germany to the Ukrainian border — and memories are longer. As battles rage in Mariupol and Kyiv and Kharkiv, Europeans could be forgiven for wondering whether the past is actually past at all.

Unsurprisingly, the subject of World War II was broached repeatedly during my visit. Discussions of Putin frequently led back to Hitler and Stalin; talk of Russia’s military aggression beyond its borders conjured German Lebensraum.

We talked about Germany’s post-1945 pacifist zeitgeist and the government’s recent decision to increase military spending in light of events in Ukraine.

In our house, there was a particular focus on the expansion of NATO after the collapse of the Soviet Union. My father — an American expat who has lived in Germany for more than 40 years — believes that it was needlessly provocative to Russia, just as the Treaty of Versailles had been to the Germans before the Second World War. A Putin response was predictable, he says, though not justifiable. Others disagreed, saying NATO’s expansion into Eastern Europe was necessary to protect those countries (including small ones like Latvia, Estonia and Lithuania) from Russian bullying and resubjugation.

On the streets in Germany, reminders of the last war were, as always, hard to avoid.

In the university town of Darmstadt, for instance, I saw a young man crouched near the ground polishing, or perhaps installing, a group of Stolpersteine, the small metal “stumbling stones” set into the sidewalks to mark the former homes of victims of Nazi extermination or persecution.

There are now tens of thousands of these small brass plaques throughout the country — designed, of course, to keep alive the memory of the war and the Holocaust, as one step toward never repeating it.

That’s more necessary than ever because firsthand memories of World War II are fading away. You have to be close to 90 years old now to have clear recollections; soon, victims and perpetrators alike will be gone, and memories will be indirect, passed down through the generations and even more myth-filled than they already are.

My father and his wife, who is German, remember the war, though they are now the exception, not the rule.

The Germans I spoke with favored Western support for Ukraine’s defense. But I also heard nagging doubts about the role of the United States.

The trans-Atlantic partnership, built during the Cold War years that followed World War II, has been under strain in recent years. Germans, like other Europeans, were upset first by the excesses of the Bush administration’s war on terror, and then the Trump administration’s “America First” policy and its lukewarm commitment to European security. One person I spoke to questioned American credibility, criticizing President Obama for failing to follow through in 2013 on the “red line” he seemed to have set for Syria’s Bashar Assad if he used chemical weapons against his own people.

Add to those concerns a bit of national uncertainty in the wake of the departure of Chancellor Angela Merkel, who was a steady hand and a trusted leader, plus the the woes of the European Union in recent years — including Brexit — and a measure of anxiety is understandable.

On the other hand, the bomb near our house was rendered harmless in a controlled detonation, with no injuries. There’s that to celebrate at an uneasy time in Europe’s history.