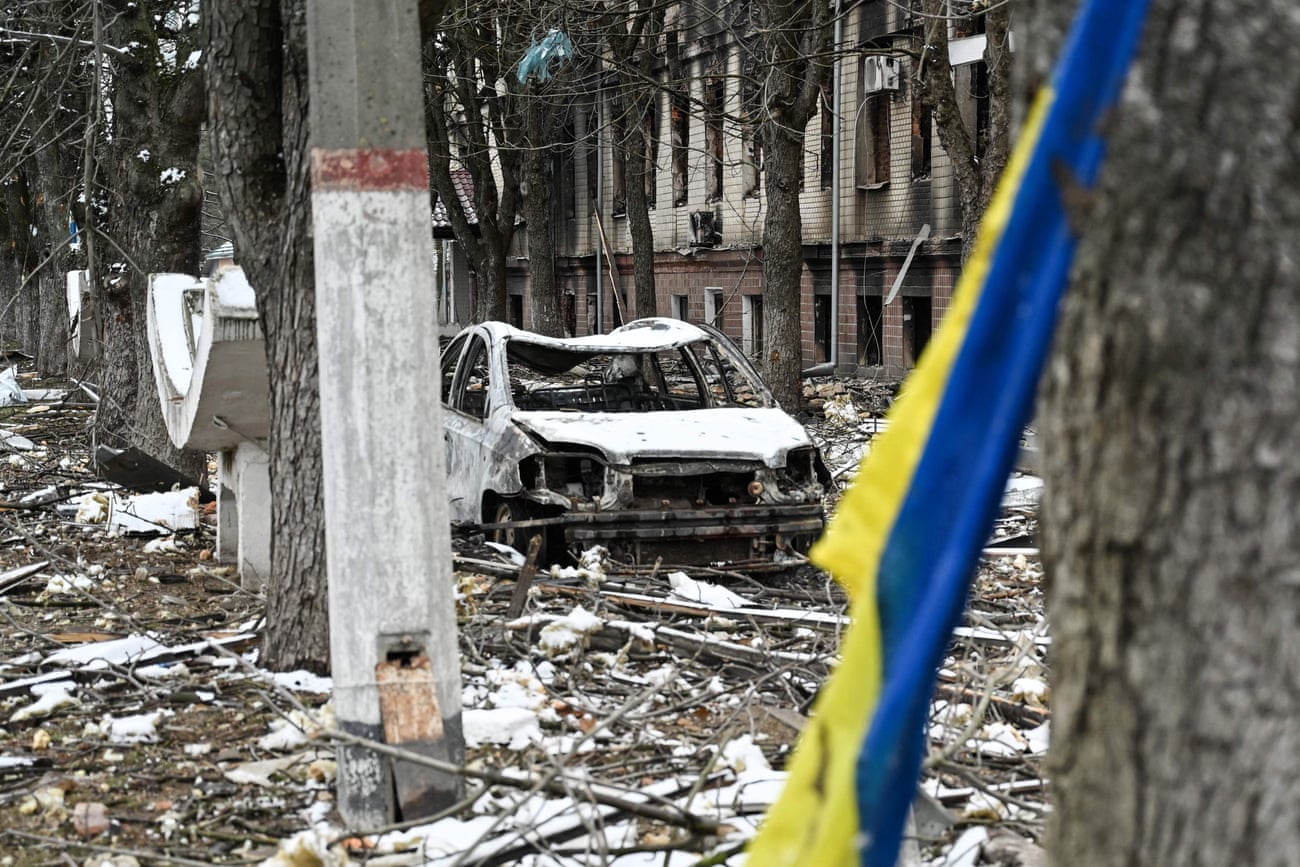 history of Russia’s war on Ukraine

To understand the tragedy of this war, it is worth going back beyond the last few weeks and months, and even beyond Vladimir Putin

or three months everyone argued about whether there would be a war, whether Vladimir Putin was bluffing or serious. Some of the Russia experts who had long told people to take it easy were now telling people to get worried. Others, who had long criticised Putin, said that he was just trying to draw attention to himself, that it was all for show. Among the analysts, there was a debate between the troop watchers and the TV watchers. The troop watchers saw the massive concentration of Russian forces at the border and in Crimea and warned of invasion. The TV watchers said that Russian TV was not ramping up war hysteria, as it usually does before a Russian invasion, and that this meant there would be no war.

The question was settled, for ever, on the night of 24 February, when Russian missiles hit military installations and civilian targets inside Ukraine, and Russian armoured convoys crossed the border. Then everyone began arguing about why. Was Putin crazy? Was he genuinely concerned about Nato expansion? Was he thinking in amoral categories – as longtime Putin scholar Fiona Hill suggested – that were fundamentally historical, along timescales that made no sense to ordinary mortals? Was he trying, bit by bit, to reconstruct the Russian Empire? Was Estonia next?

I had travelled to Moscow in January to see what I could learn. The city looked beautiful. Snow lay on the ground and everyone was very calm. Yes, repressions were ramping up, the space for political expression was narrowing, and many more people had died of Covid-19 than was officially acknowledged. And yes, speaking of Covid, Putin was paranoid about it, forcing anyone who wanted to see him in person to quarantine for one week in advance in a hotel the Kremlin had for that purpose. No one thought things were going in anything like the right direction, but none of the people I spoke to, some of them fairly well connected, thought an invasion was actually going to happen.

They thought Putin was engaged in coercive diplomacy. They thought the American intelligence community had lost its mind. I visited friends, listened to their reflections, gamed out the various scenarios. Even if an invasion did happen – a big if – it would be over quickly, we all agreed. It would be like Crimea: a precision operation, the use of overwhelming technological superiority. Putin had always been so cautious – the sort of person who never started a fight he wasn’t sure to win. It would be terrible, but relatively painless. That was wrong. We were all wrong.

That everyone was wrong did not prevent everyone from immediately claiming that, in fact, they’d been right. Russia experts who had been arguing for years that Putin was a bloody tyrant rushed forth to claim vindication, for he had undoubtedly become what they had claimed he was all along. Russia experts who had been arguing for years that we needed to heed Putin’s warnings could also claim vindication (though more quietly) because Putin had finally acted on those warnings. As usual, officials from US presidential administrations of yore were trotted out on TV as talking heads, dispensing their wisdom and accepting no responsibility, as if they had not all contributed, in one way or another, to the catastrophe.

This war was not inevitable, but we have been moving toward it for years: the west, and Russia, and Ukraine. The war itself is not new – it began, as Ukrainians have frequently reminded us in the past two weeks, with the Russian incursion in 2014. But the roots go back even further. We are still experiencing the death throes of the Soviet empire. We are reaping, too, in the west, the fruits of our failed policies in the region after the Soviet collapse.

This war was the decision of one person and one person only – Vladimir Putin. He made the call in his Covid isolation, failed to mount any sort of campaign to garner public support, and barely spoke to anyone outside the tiniest inner circle about it, which is why just a few weeks before the invasion no one in Moscow thought it was going to happen. Furthermore, he clearly misunderstood the nature of the political situation in Ukraine, and the vehemence of the resistance he would encounter. Nonetheless, to understand the tragedy of the war, and what it means for Ukraine and Russia and the rest of us, it is worth going back beyond the last few weeks and months, and even beyond Vladimir Putin. Things did not have to turn out this way, though where exactly we went wrong is much harder to determine.

1. The breakup: Russia and Ukraine after the fall of the USSR
Thirty years ago, as the countries of the former Soviet Union declared their independence, everyone breathed a sigh of relief that the empire disappeared so gently. Aside from a nasty irredentist conflict between Armenia and Azerbaijan over the ethnic Armenian exclave of Nagorno-Karabakh, there was very little violence. But gradually, almost imperceptibly, conflict began appearing at the edges of the former USSR.

In Moldova, Russian troops supported a small separatist movement of Russian-speakers that eventually formed the tiny breakaway republic of Transnistria. In Georgia, the autonomous region of Abkhazia, also supported by Russian arms, fought a short war with the central government in Tbilisi, as did South Ossetia. Chechnya, a Russian republic that had fiercely resisted the encroachment of the empire throughout the 19th century, and which suffered terribly under Soviet rule, declared its own wish for independence, and was ground down in not one but two brutal wars. Tajikistan endured a civil war, in part a fallout from the civil war raging in Afghanistan, with which it shared a border. And on and on. In 2007, Russia launched a cyber-attack against Estonia, and in 2008, it responded to an attempt by Georgia to retake South Ossetia with a massive counter-offensive. Despite all this, it was still common for people to say that the dissolution of the Soviet Union had been miraculously peaceful. And then came Ukraine.

In the laboratory of nation-building that was the former empire, Ukraine stood out. Some of the Soviet former republics had longstanding political traditions and distinct linguistic, religious and cultural practices; others less so. The Baltic states had each been independent for two decades between the world wars. Most of the other republics had had, at best, a brief experiment with independence in the immediate wake of the collapse of tsarism in 1917. To complicate matters, many of the newfound nations had significant Russian-speaking populations who were either uninterested in or actively hostile toward their new national projects.

Ukraine was unique on all these fronts. Though it, too, had only existed as an independent state in modern times for a few short years, it had a powerful nationalist movement, a vibrant literary canon, and a strong memory of its independent place in the history of Europe before Peter the Great. It was very large – the second-largest country in Europe after Russia. It was industrialised, being a major producer of coal, steel and helicopter engines, as well as grain and sunflower seeds. It had a highly educated populace. And that populace at the time it became independent in 1991 numbered 52 million – second only to Russia among post-Soviet states. It was strategically located on the Black Sea and on the border with numerous eastern European states and future Nato members. It possessed what had once been the most beautiful beaches in the USSR, on the Crimean peninsula, where the Russian tsars had spent their summers, as well as the USSR’s largest warm water naval port, in Sevastopol. It had suffered greatly during the German advance into the Soviet Union in 1941 – of the 13 “hero cities” of the USSR, so called because they saw the heaviest fighting and raised the stoutest resistance, four were in Ukraine (Kyiv, Odesa, Kerch and Sevastopol). The economies of Russia and Ukraine were deeply intertwined. Ukrainian factories in Dnipropetrovsk were a vital part of the military-industrial capacity of the USSR, and Russia’s largest export gas pipelines ran through Ukraine. Strategically, in the words of historian Dominic Lieven, describing the situation circa the first world war, Ukraine could not have been more vital. “Without Ukraine’s population, industry and agriculture, early-20th-century Russia would have ceased to be a great power.” The same was true, or seemed to be true, in 1991.