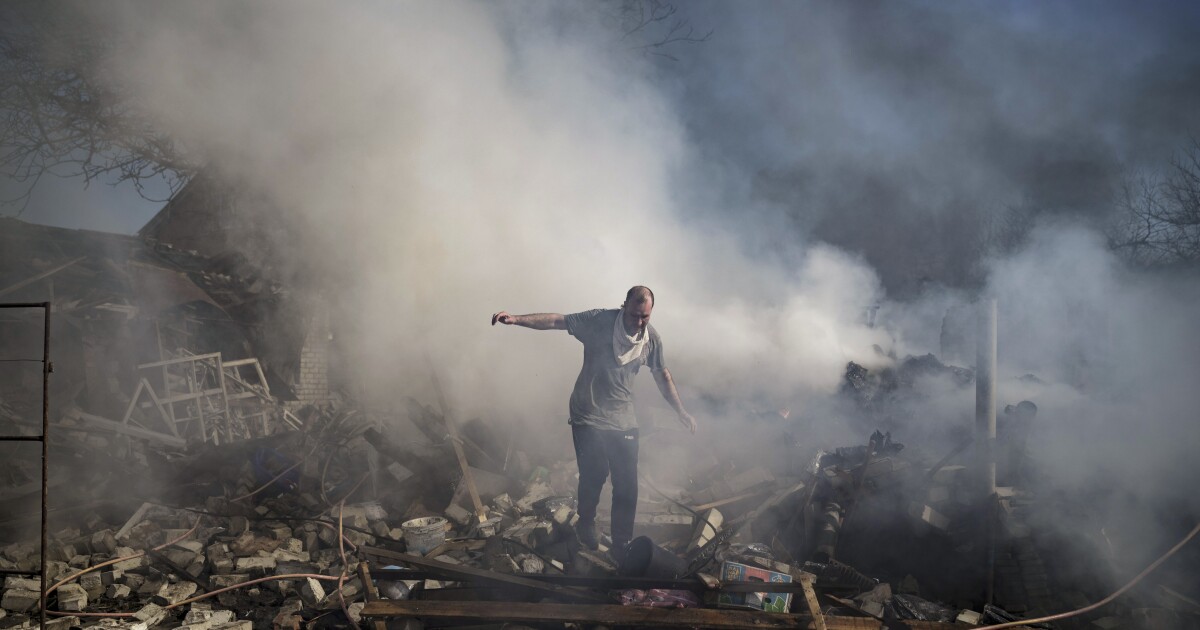 The Ukrainian government said Friday that it had conducted its first prisoner exchange with Moscow during their month-long war, even as it accused enemy forces of forcibly sending people to Russia and reported at least 300 dead in a recent airstrike on a theater in Mariupol.

Ukrainian Deputy Prime Minister Iryna Vereshchuk in a message posted to Telegram said the countries exchanged prisoners twice. Ukraine received 19 civilians and 10 soldiers and handed back 11 civilians — captured from a sunken ship near Odesa — and 10 soldiers to Russia.

At the same time, a Ukrainian official accused Moscow of forcing hundreds of thousands of residents — including those from the battered southeastern port city of Mariupol — across the border to Russia, adding another layer to the humanitarian catastrophe of Russia’s protracted war even amid advances by Ukrainian forces and signs of diplomacy.

Lyudmyla Denisova, the Ukrainian ombudsman, said more than 400,000 people, nearly a quarter of them children, have been sent to Russia. Denisova accused Russia of wanting to use them as “hostages” in negotiating Kyiv’s surrender.

The Russian government verified the relocations but said they were voluntary and focused on people in Donetsk and Luhansk, eastern regions where pro-Russia separatists have fought in support of Moscow’s invasion.

The developments came as President Biden, who attended emergency summits of the North Atlantic Treaty Organization, the Group of 7 and the European Council in Brussels on Thursday, prepared to head to Poland to cap off a three-day transatlantic trip focused on the war.

Biden is scheduled to visit Rzeszow, a Polish city near the Ukraine border that has become a hub for weapons going into Ukraine and refugees flowing out. The president will meet with U.S. soldiers from the 82nd Airborne Division, who are stationed in Rzeszow as part of NATO forces.

On Friday, Biden and European Commission President Ursula von der Leyen announced that the U.S. would substantially increase liquefied natural gas sales from the U.S. and other countries to the European Union to help its 27 member nations wean themselves off of Russian energy imports.

Speaking in Brussels, Biden said the trade deal would hurt Moscow, where Russian President Vladimir Putin has used energy profits to “to drive his war machine.”

In the last week, reports from the Ukrainian government and Western intelligence groups have cited Ukrainian advances in pushing Russian troops farther away from the capital of Kyiv and stalling the enemy in several other population centers.

But attacks and shelling have continued in southern and eastern areas, which have been hit hardest since the invasion began Feb. 24.

In the north, a regional official said Friday that Chernihiv was “surrounded” by Russian forces. “The city has been conditionally, operationally surrounded by the enemy,” said Gov. Viacheslav Chaus, speaking on TV and describing regular artillery fire hitting Chernihiv.

In central Ukraine, local officials said Friday that Russian missiles hit a military base in Dnipro, though no information on injuries or deaths was given.

In Mariupol, large swaths of which have been reduced to rubble, the City Council said Friday that last week’s airstrike on a theater being used as a shelter had killed at least 300 people. Aerial photos showed that the word “children” had been written on the ground outside the venue in hopes of deterring an attack.

The council warned that “more and more deaths from starvation” were imminent in the devastated city, where the 100,000 residents who remain — out of a prewar population of 430,000 — have little food, water and electricity.

In Kharkiv, Ukraine’s second-largest city, missile strikes have shaken the city for days and left residential areas flattened. The city has undergone constant bombardment since the start of the war and lies only about 25 miles south of the Russian border, but has not yet been taken by Russian forces.

In the Moskovskyi district, east of the city center, plumes of smoke rose in the air Friday, the aftermath of attacks that have destroyed nearly half of the housing stock. Booms reverberated through the morning as vendors sold packaged sausages from the back of their vehicles and residents lined up at government buildings and churches for aid.

Western Ukraine has remained comparatively free of violence, though the occasional attack has hit suburban and rural regions, including a deadly assault on a military base outside Lviv earlier this month.

The Russian invasion has killed at least hundreds of civilians and spurred an exodus of more than 3.5 million people. Millions more, half of them children, have been displaced from their homes within Ukraine, according to the United Nations.

On Friday, refugees continued to flee, with hundreds lined up in Shehyni, a Ukrainian town on the Polish border. It was a scene that has been repeated daily for more than a month. Nearly all of those in line were women and children, because most adult men of fighting age are barred from leaving. The refugees carried suitcases, backpacks and duffel bags.

Darya, 27, held her shaggy dog, Lima, in her arms, and was accompanied by her 11-year-old son. She had traveled west across the nation from Dnipropetrovsk, a region in the southeast, and planned to stay with a former classmate who lives in Poland.

“We waited as long as we could, but then the shelling got too close and we decided the safe thing to do was to leave,” said Darya, who declined to give her last name out of concern for her safety. “It’s so difficult, though, to pack up one’s life and leave, not knowing what will happen.”

Yam reported from Kharkiv; McDonnell from Shehyni, Ukraine; and Kaleem from London. Noah Bierman in Washington contributed to this report.