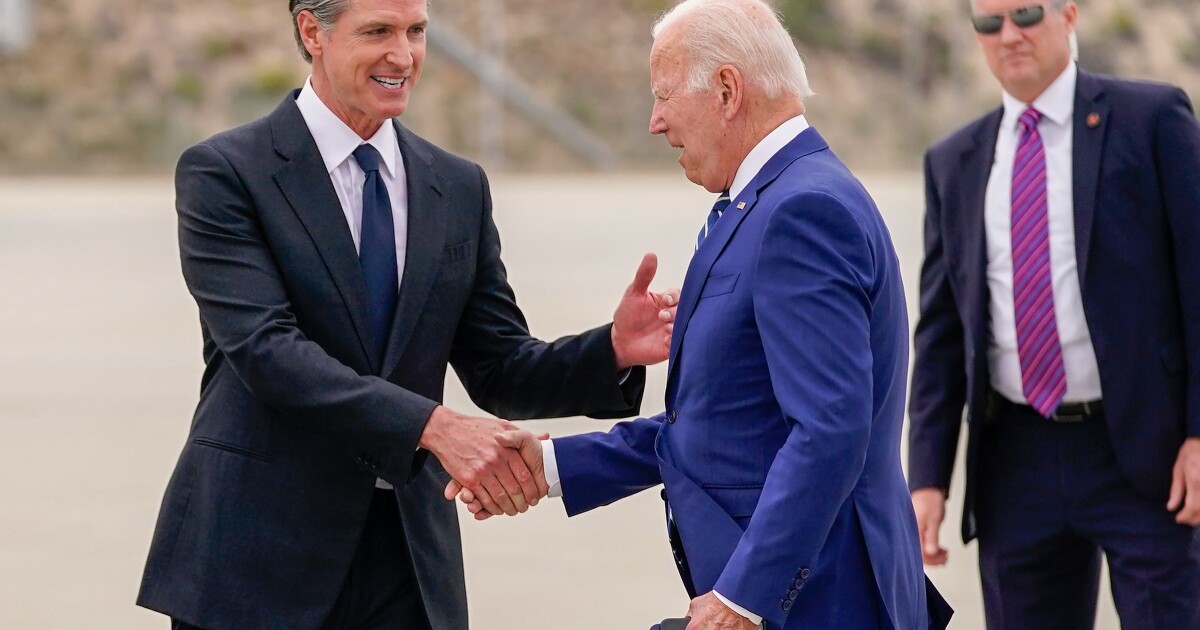 President Biden formally opened the Summit of the Americas in Los Angeles on Wednesday by declaring democracy a “hallmark of our region,” as he sought to quell tensions over his decision to exclude some leaders the U.S. considers autocratic, a move that triggered a partial boycott of the conference.

“As we meet again today, in a moment when democracy is under assault around the world, let us unite again and renew our conviction that democracy is not only the defining feature of American histories, but the essential ingredient to Americas’ futures,” Biden said during a 15-minute speech kicking off the summit at Microsoft Theater.

“Our region is large and diverse,” he added. “We don’t always agree on everything. But because we’re democracies, we work through our disagreements with mutual respect and dialogue.”

Before the speech, the president and First Lady Jill Biden greeted more than 20 heads of state from the Western Hemisphere, including Canada, Brazil and Argentina. But the summit, being held in the U.S. for the first time since its inaugural meeting in Miami in 1994, has been overshadowed by the fallout from the exclusion of leaders from Cuba, Nicaragua and Venezuela.

Mexico’s President Andrés Manuel López Obrador announced Monday he would skip the summit over the squabble and instead send his foreign minister.

The leaders of Bolivia, Guatemala and Honduras are also not attending — dealing a blow to Biden’s efforts to reassert U.S. leadership in the region on economic cooperation, migration and climate change.

“We need to break the cycle where marginalized communities are hit the hardest by disasters and have the fewest resources to recover from crises and prepare for the next one,” Biden said.

The Latin American and Caribbean region has been among those hit hardest by the COVID-19 pandemic, accounting for more than 40% of the total global reported deaths, according to the White House. The region has also grappled with economic collapse, amplified by global inflation, as well as environmental disasters and political instability.

To address those challenges, the president proposed a fundamental change to the Inter-American Development Bank, vowing to invest U.S. capital in the bank’s private sector financing arm to enhance digital connectivity, renewable energy and health.

The president’s economic framework, however, is unlikely to satisfy those looking for more trade access. Administration officials, who briefed reporters ahead of Biden’s remarks, emphasized that his plan builds on existing free trade agreements but declined to say how much the U.S. would invest in it. The framework has yet to have any countries sign on as participants.

The president also previewed a migration declaration to be unveiled on Friday, describing it as a “groundbreaking, integrated new approach to manage migration and shared responsibility across the hemisphere.”

The declaration comes as a caravan of thousands of migrants, mostly from Central America, Venezuela and Haiti, began to head north from near Mexico’s southern border with Guatemala earlier this week to protest their conditions.

The Biden administration has struggled to manage a record flow of migrants at the U.S.-Mexico border over the last year. Border officials made nearly 202,000 apprehensions in April, a slight drop from March, which saw a 22-year high.

“Safe and orderly migration is good for all of our economies, including the United States,” Biden said, calling it a “catalyst for sustainable growth.”

But he added, “unlawful migration is not acceptable.”

The declaration is expected to include commitments from the region’s leaders to enhance stability and increase opportunities for safe and orderly migration throughout the region, Biden said. It’s unclear which countries will end up signing on to the plan, but White House officials are adamant that Mexico, Latin America’s second-most-populous country and a key U.S. partner in migration management, will participate.

Among the more serious challenges facing the region is the ongoing COVID-19 pandemic, which exposed serious deficiencies and inequalities in medical care throughout Latin America.

Biden announced the launch of a new America Health Corps to train 500,000 public health and medical professionals in the region within five years, as well as a new partnership among the hemisphere’s largest exporters of food — the U.S., Argentina, Brazil, Canada, Chile and Mexico — to increase food production for export and fertilizer production for transportation.

Several of the region’s health experts are in Los Angeles lobbying to obtain more vaccines and the equipment and technology needed to produce them. They also would like access to more diagnostic equipment and treatments.

“What we have gone through is training for the next pandemic,” Colombia’s health minister, Fernando Ruiz, said in an interview.

Ruiz is attending the summit as part of the Colombian delegation and hoping to share experiences of dealing with the pandemic, during which Colombia has fared reasonably well. “The next outbreak is knocking at the door.”

White House officials contend that the controversy over the guest list will not undermine the president’s efforts to boost the region’s economies. Vice President Kamala Harris on Tuesday announced nearly $2 billion in new private investment in El Salvador, Honduras and Guatemala, bringing the total in corporate pledges for investment in the region to $3.2 billion since she began the initiative last year.

Harris said in a speech earlier Wednesday that her work soliciting billions of dollars in new investment from companies and organizations was “essential” to improving conditions in Latin America.

The vice president added that she and Biden see this week “as an opportunity to launch new initiatives, to begin new conversations and to build new partnerships.”

On Thursday, Biden will meet for the first time with Brazilian President Jair Bolsonaro, who had threatened to skip the summit. The right-wing populist was one of the last world leaders to congratulate Biden after he took office last year, and renewed his skepticism over the 2020 U.S. election results in a television interview earlier this week.

While traveling to Los Angeles, Biden spoke by phone with Venezuelan opposition leader Juan Guaidó, whom the U.S. recognizes as Venezuela’s interim president. Guaidó was not included in this year’s summit.