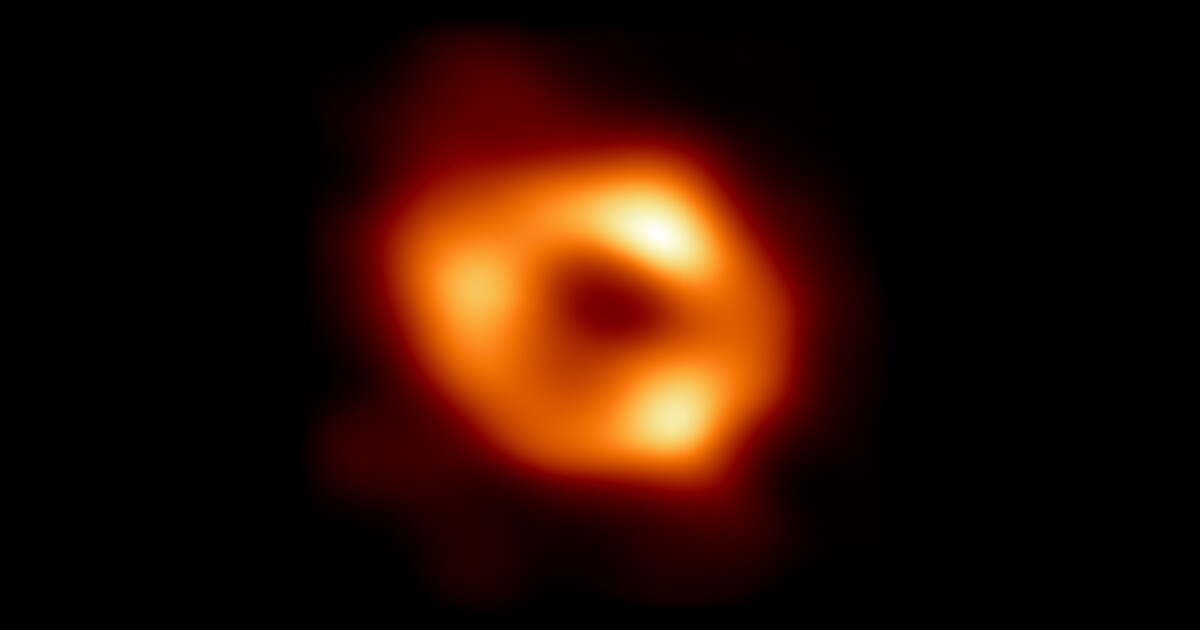 At the center of the Milky Way galaxy is a massive, mysterious presence exerting a powerful influence on the stars around it — and on the imaginations of astronomers.

Now, scientists have the first-ever photograph of the formidable force at the center of our galaxy: Sagittarius A*, a supermassive black hole with the mass of 4 million suns.

The image, unveiled Thursday, was captured by a network of eight radio observatories at six locations around the world. Together they form the practical equivalent of an Earth-sized telescope designed to see some of the most mysterious and perplexing objects in the universe.

Taking a picture of a black hole is a singular feat, since its signature feature is that nothing within its gravitational grasp can escape — including light.

But astronomers can see the ring-shaped boundary known as the event horizon, and beyond that the golden, gauzy ring of superheated gas and bending light that skirts the edge of the black hole’s point of no return.

“What’s more cool than seeing the black hole at the center of our own Milky Way?” said Katie Bouman, a Caltech computational imaging professor and a member of the international telescope team.

The results were published today in the Astrophysical Journal Letters.

Black holes are the densest objects in the universe. When a giant star explodes in a final, dramatic supernova, its collapse creates a tiny clot of matter so dense that its gravitational pull warps the fabric of space and time around it.

Scientists have long suspected that supermassive black holes lie at the center of every galaxy, including our own. Yet despite their colossal size, they’re an elusive presence in the universe, observable only by their influence on the objects around them.

Capturing an image of an object from which no light can escape is the monumental challenge the Event Horizon Telescope consortium set out to tackle in 2009. The effort involves the collaborative work of more than 300 scientists and engineers at 80 institutions around the globe.

It took a decade to produce the first photograph of a black hole, the one at the center of the Messier 87 galaxy some 55 million light-years away (the black hole is also known as M87*). Its event horizon is nearly 25 billion miles wide, with a mass roughly that of 6.5 billion suns.

Though Sagittarius A* — or Sgr A* for short — is a mere 27,000 light-years away from Earth, it has less than 0.1% of M87*’s mass. If it wasn’t conveniently located in our own galaxy, it would have been nearly impossible to photograph. Bouman likened it to standing in Los Angeles and taking a photo of a grain of salt in New York.

“It’s a gentler, more cooperative black hole than we had hoped for,” said Feryal Özel, a University of Arizona astronomer and founding member of the telescope consortium. “We love our black hole.”

Indeed, the pictures provide the strongest evidence to date for Einstein’s theory of general relativity. With Sgr A* in particular, the size and shape of the ring surrounding the event horizon are remarkably consistent with what scientists predicted based on Einstein’s theory.

“They’re so different in so many ways, yet the same theory of gravity actually explains” the shape of both images, Bouman said. “And that is a big result. It’s actually very exciting that they look very similar.”

A popular classroom model of a black hole offers a useful way to visualize this cosmic phenomenon. Picture the fabric of space-time as a sheet of plastic wrap pulled tight, and Earth as a tennis ball dropped into its center. The ball will create a slight curve in the film, just as our relatively modest-sized planet does to space-time.

A ball of steel, however, will bend the film much further. If the ball is heavy enough, the film will sag so much that any other objects will roll inescapably down toward the heaviest one. That’s what black holes do to time and space.

“Black holes are not the big cosmic vacuum cleaners Hollywood likes to portray them as,” Bouman said.

The smaller and less efficient Sgr A* is more likely a better representative of the typical black hole in the universe than the ultra-massive M87*, Bouman said.

UCLA astronomer Andrea Ghez was awarded the Nobel Prize in 2020 for discovering Sgr A*. The image the EHT produced was “remarkably similar” to the supermassive black hole she and her colleagues theorized was at the center of this galaxy.

“There’s a prediction that you should see this concentration of light around the black hole, just outside the event horizon, and that you can actually see this is remarkable,” Ghez said. “It’s really exciting.”

Photographing a black hole with a single telescope would have required a lens 13 million meters wide — in other words, a telescope about the size of Earth itself.

In place of that logistical impossibility, the Event Horizon Telescope collects data via eight radio observatories in Greenland, Antarctica and six other locations in between, synchronized to atomic clocks. As the Earth rotates, the observatories view their target from a multitude of angles.

Sgr A*’s glamour shot was distilled from 5 petabytes of data, which is equivalent to 100 million TikToks, said EHT member Vincent Fish of the MIT Haystack Observatory. The published picture is an average of multiple images pulled from that data.

As recently as two decades ago, “I would have thought we would never see pictures like this. It would be too hard,” said Daniel Stern, an astrophysicist studying black holes at NASA’s Jet Propulsion Laboratory in La Cañada Flintridge.

“It looked better than I was expecting,” he said. “It matches theories that are decades old of what we thought black holes would be like.”

Because this black hole is so much smaller, the ring around it appears a lot busier. Gases that take weeks to orbit M87* can circle Sgr A* in just minutes. Given the rapid changes in emissions, it’s possible that the telescope will be able to capture moving images of the activity around the event horizon in coming years, Bouman said — potentially in multiple dimensions.

“What if we could actually map out where the gas is over time in three dimensions around the black hole?” Bouman said. “That’s one thing that I’m really excited about.”